Ohhh halloooo dear English speaking-thinking-reading-hearing listener, welcome back to me, @sciencemug, the blog-podcast-twitter&instagram account-gofundme useless campaign holder-entity behind the zero items selling e-shop that tells you science stories, try to build nanobots with oranges peels and a second hand smile bought in a cheap pawn shop somewhere north of Philadelphia, aaand that does this in En?ish, a language that is to real English what a middle age cucumber that wears a good quality blond wig while riding a mechanic seahorse in some poorly illuminated joint full of vinegar addicted and wasabi freaks is to something someone whose brain is NOT under the influence of a heavy cosmic vodka rays bombardment can normally see.
Aaand that speaks to you thanks to the voice kidnapped from a dumb human via a wireless-voodoo trick.


So quick recap of the last episodes/posts:
an international bunch of researchers headed by professor Nuria Selva Fernandez (who works at the Institute of Nature Conservation Polish Academy of Sciences) publishes a paper on Science and in the paper the scientists tell us they created a map of the world’s roadless areas, namely, according to the definition of the same professor Selva Fernandez team, “terrestrial areas not dissected by roads […]” “that are at least 1 km away from all roads and, therefore, less influenced by road effects”(P).

The map shows that roadless areas with a 1-km buffer to the nearest road cover about 80% of Earth’s land (105 million square kilometers circa).

Moreover the good researchers create a unit less index to score the ecological value of the above mentioned roadless areas. The index is called EVIRA, as in Ecological Value Index of Roadless Areas, and it's a unit less index that goes form 0 (0 being the slums of Gotham City) to 80 (80 being Eden before that fuss about the iPad, I mean the apple).

Sooo, that’s what it has been told in the last episodes/posts.

And now, let’s see how the story continues.

Our eco science dudes decide to find what is the amount of roadless areas that is located inside the protected areas of the world.

To do that professor Selva Fernandez’ team, aka the SF bunch, has to collect information about the protected areas existing all around the world. So the science gang once again dig wildly into data-sets, two to be precise.

The first data-set is that of
the International Union for Conservation of Nature (aka IUCN), a group founded in 1948 with over 1300 members, both government and civil society organizations from 170 countries. IUCN is “the world’s largest and most diverse environmental network” (see website), it can count on the collaboration of over 10000 experts, and its mission is to provide “public, private and non-governmental organizations with the knowledge and tools that enable human progress, economic development and nature conservation to take place together” (s.w.).

The second data-set about protected areas used by the SF bunch is that of the United Nations Environment Programme–World Conservation Monitoring Centre (aka UNEP-WCMC) which “is a world leader in biodiversity knowledge” (s.w.).

So these two data-set spit out seven types of protected areas: from strictly protected areas like nature reserves, wilderness areas and national parks (types Ia, Ib and II) to protected natural monuments (type III) all the way down to protected area with sustainable use of natural resources (type VI).

Now, our eco science pals put these data on protected areas, together with their map of the roadless areas. They then come up with some interesting news. 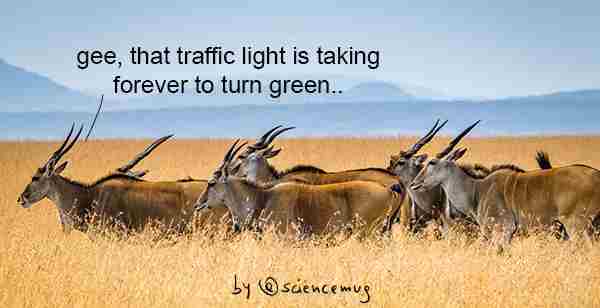 Pic free to use by sutirta budiman (source: Unsplash)
[Adapted by @sciencemug]

The SF bunch then tightens the filter up and considers only the most strictly protected areas (nature reserves, wilderness areas and national parks) finding that these protected areas cover the 4.2% of global land (roughly two thirds of Russia) and just an infamous 3.9% of the roadless areas (roughly the extension of Mexico plus Greenland).
The SF bunch finds also that “[o]nly in North America, Australia, and Oceania are more than 6% of roadless areas under strict protection” (P).

Ok, to sum up, only a tiny part of roadless areas are inside protected areas.
But, as for sure you are already thinking, clever listener, the SF bunch, with its 0 to 80 EVIRA index, has shown that a big chunk of the roadless areas, the 35%, have low ecologic value (that is it scores low in the EVIRA scale). Sooo, maybe the good high EVIRA scoring ecologically gooooood roadless stuff is indeed that inside the protected areas. Right?
Aaaand the answer is: nope!

The picture gets even somber when our eco-science map pack makes a 360 degrees tour of the global policies specifically addressing ecological issues.

The SF bunch starts picking at the so called “Aichi Targets”. These targets are 20 strategic goals, to be reached by 2020, that sum up the Strategic Plan for Biodiversity 2011-2020, a plan adopted in Nagoya Japan in 2010 by the members of the Convention on Biological Diversity which defines biodiversity as “abundance [...] distributions of and interactions between genotypes, species, communities, ecosystems and biomes” (s.w.).

The Aichi Targets go from raising a general awareness about the value of biodiversity (target 1), to the strong reduction of loss of natural habitats and of their degradation and fragmentation (target 5), to the reduction of human driven climate change effects on various ecosystems (target 10), to the strong increase of the amount of money invested by governments to effectively implement the Strategic Plan itself (target 20) (1).

To sum up the Aichi Targets are the goals to achieve in order to: implement a strategy which wants to address the causes of biodiversity loss by mainstreaming the biodiversity issue across government and society; to sensibly shrink the direct pressures on biodiversity; to promote a sustainable use of the natural resources; to save biodiversity by safeguarding ecosystems, species and genetic diversity; to underline the benefits biodiversity provides to humankind; finally, to make global policy design and put into action an “effective, participatory and updated biodiversity strategy” (1). 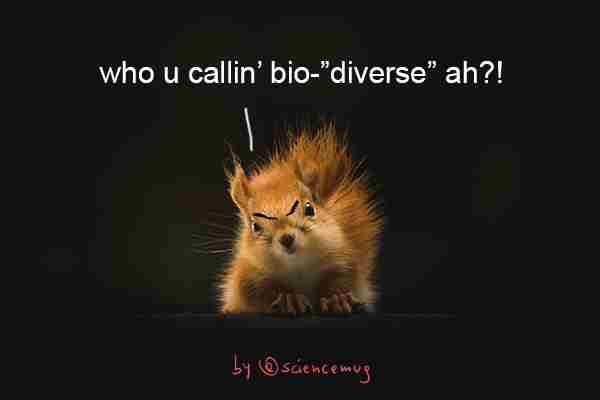 Pic free to use by Geran de Klerk (source: Unsplash)
[Adapted by @sciencemug]

To take a stock of the situation about the Aichi Targets and therefore about the Strategic Plan for Biodiversity, the Secretariat of the Convention on Biological Diversity publishes a report, the Global Biodiversity Outlook (2).

And the report says that things are not going well.

As the SF bunch writes in its paper: “Governments have failed on several accounts to keep their use of natural resources well within safe ecological limits (Aichi target 4); to halt or at least halve the rate of habitat loss and substantially reduce the degradation and fragmentation of natural habitats (Aichi target 5); and to appropriately protect areas of particular importance for biodiversity and ecosystem services (Aichi target 11)” (P).

Moreover evidence indicates that there’s even a worsening situation in many biodiversity related issues including pollution and introduction of invasive species (3).

Although some indicators related to the achievement of the Aichi Targets show a positive rate of change, it may anyway take a lot of years, if not decades, before this trend actually “translate to positive changes in the state of biodiversity” (3).

Professor Selva Fernandez and colleagues, besides, focusing on the topic of their research, that is roads, stress on the fact that policy usually forgets to value biodiversity when it comes to the planning of road infrastructures and development of human activities in general.
One example of this lack of vision is the Cohesion Policy of the European Union, namely the policy that funds hundreds of thousands of projects all over Europe and which mission is not only to promote economic and social cohesion inside Europe, but also a, quote, “more balanced, more sustainable territorial development” (s.w.).

To prove this, the SF research pals analyze the compatibility of the efforts needed to preserve the world’s roadless areas with the just mentioned 20 Aichi Targets and also with the United Nation’s 2030 Agenda for Sustainable Development with its own 17 Sustainable Development Goals that largely overlap with the Aichi ones since they want to defeat poverty, hunger, inequality among genders and countries, to ensure that everybody has healthy life, good education, sustainable energy, to conserve, protect, restore and wisely manage world’s water and terrestrial resources (4).

And what do our scientists find? Well, the answer after the commercial break!

Sooo, dear listener, back to conflicts versus synergies of the conservation of roadless areas with the 17 United Nations Sustainable Development Goals and the 20 Aichi Targets.
Professor Selva Fernandez and her colleagues calculate that the conservation of the roadless areas is in full conflict with 4 of the Sustainable Development Goals, and has more conflicts than synergies with other 5 of them.
In total roadless areas preservation is in full or partial conflict with more than a half of the United Nations goals for the Sustainable Development.
Let’s make you an example.
United Nations Sustainable Development Goal number two is to “end hunger, achieve food security and improved nutrition and promote sustainable agriculture” (4). In many areas of the world hunger grows with the distance from roads (P_supp). So, it would be necessary to build new roads in many parts of the planet to grant an easier access to markets and to make easier for food aid to be delivered to isolated communities.
But, and I quote from the paper: “[i]n remote regions, as they are found in parts of the western Amazon forests, the subsistence of many indigenous communities depends on forest products. However, new roads built into previously remote areas of low human population density have often triggered conversion of forest to croplands and pastures […] and unsustainable exploitation of wildlife that can then be marketed easily as bushmeat in cities. Bushmeat can thus become scarce for residents who rely on this protein source” (P_supp).
Professor Selva Fernandez and her colleagues, besides, find that the preservation of roadless areas shows an ambivalent relationship, that is a certain level of conflict, with a good 6 of the 20 Aiki Targets too.
So, dear listener, to sum up our eco-science dudes show that there are imminent conflicts coming up between the necessity of the preservation of roadless areas and the goals global policy has set to develop the world in a sustainable way and preserve biodiversity.
Sooo dear listener that at this point of the episode sees flying table lamps colliding with jumping improbable haircuts while screaming “Bazaaaaangahahhhah! Death to the yellow booms long live the rosemary!”, the conclusion of professor Selva Fernandez and her colleagues, after aaaaaaaaall this hurricane of researches and data mining, is this, and I quote again: “[g]lobal protection of ecologically valuable roadless areas is inadequate. International recognition and protection of roadless areas is urgently needed to halt their continued loss” (P).
But the question that nobody has answered till now, the question that, I’m sure, is burning inside your magnificent brain enlightening all your cerebral cortex and probably some of that naughty stuff in your limbic system too, the question is: WHYYYYYY?! Why ten scientists focus their efforts on roadless areas and invest their time scrutinizing almost three hundred papers, spending countless hours on checking data-sets, making maps, indexes with a somehow scary name to read (if you’re an Italian male you know what I mean), studying ecological and probably unachievable targets?
Eeeh, dear listener, the answer on the next and final episode!
Take care.
Ciaz!