OF OCEAN, PLASTIC & BUGS: AN INTERVIEW

OF OCEAN, PLASTIC & BUGS: AN INTERVIEW
(in Eng?ish)

It’s a Wednesday, a big one, like a XXXL size one or so, but not a fatty Jabba the Hutt-big one, with all those soggy minutes and hours overflowing from its borders toward a much fitter Thursday [not Tuesday of course, since time, especially the soggy one, can’t overflow into the past, you know, otherwise the arrow of Miss Entropy (a dominatrix/nutritionist with a passion for basic physics, sloths, tattooed double chins and, of course, archery) gets all grumpy (Miss Entropy, not the arrow, which never gets grumpy because it’s very much into meditation, masters the art of self-control, aaand has a strong relationship with Mr. Valium) and you don’t want to mess with Miss Entropy and her arrow, especially when she’s all grumpy -well, maybe you can handle that if you’re a cat used to weird boxes full of guns (or of cyanide tablets and baskets of acids, or of hatching alien eggs, or of four very robust dudes who bet who would have eaten more lentils at lunch and the “it’s digestion time baby!” is going to begin…-]. No, put it simply, it’s a The Rock-big, a Ivan Drago-big, a Thor-big, a Steve Buscemi under steroids-big (… Ok, maybe not this unsettling) Wednesday.
And PiPs is floating like a feather of light on a blue sea. Under a blue sky. With its legs astride of a blue, slender, beautiful board (ok, not the same of the following pic, but, you know, whatever...).
Waiting for The wave. 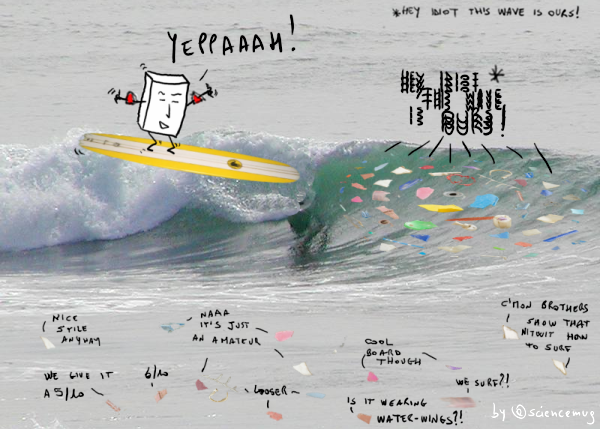 [The pictures of the ocean (a) the surfboard (b) and of the plastic material (c) are adapted from Public Domain images by @sciencemug (source: Wikimedia Commons)]

But not far from PiPs there’s a wild bunch of blue (and of other colors too) pieces of plastic trash that, on the cry of “Nobody puts Baby in a corner!” (oddly enough, plastic rubbish near the shores collectively refer to themselves as “Baby” - nobody really knows why- while the plastic mush in deep water goes by the name of “Vida”) is ready to steal the perfect coming wave from PiPs, while, on the beach, some rubber masks, a couple of parachutes, a tanned heap of creased bucks and a pair of limping mustaches just passing by, seem to enjoy the show.
PiPs knows it’ll be a rough ride, above all ‘cause the plastic stuff can count on a legion of bacteria living on them, and those tiny little bugs can surely surf (and also make a really funny impression of Steve Buscemi under steroids, but that’s another story...)
So PiPs is all tense, focused and already starting to row with its skinny arms to jump on the back of that wave when a woman bravely approaching the surly school of plastic+bugs distracts it and make it lose the moment… (*)

PiPs- Hey Miss, watch out, they’re nasty stuff! Who’re you anyway, and what are you doing here?


Ana Maria Barral- I am Ana Maria Barral, Assistant professor at National University in the balmy region of Southern California and I study the microbes that live on ocean plastic and, along with other life forms that live on it, make the so-called plastisphere. What I do here is hanging squares of different types of plastic that floats in the ocean. I am curious to know what kind of microbes attach to them when they are freshly out floating in the beach. We know quite a bit what kind of microbes live on them once they have disintegrated into tiny particles and are out in the ocean gyre. But we know little if the plastic floating close to the coast can carry any risks.

P- Cool, so you study the (coastal) plastiphere [which, by the way, I first thought to be the commercial name –the common one being “the in-real-need-of-a-hell-of-a-ton-of-wide-spectrum-antibiotics-before-they-eventually-stop-working round thingy”- of a super fancy biotech XXI century version of the old disco ball, with, instead of all those banal little mirrors so âgé, a whole load of multi-bioluminescent bugs flashing in sync with the music (hey, I should patent it, maybe I’ll get rich by that and finally realize my dream to retire in a very exclusive url of the dominion “.whateverudreamcomestrueinheredudeevenifuarebutareallystupidpostwithoveractivearmpits”…)].

[The picture of the disco ball is a Public Domain image adapted by @sciencemug (source: Wikimedia Commons)]

Anyway, Prof. Barral, why do you study precisely bacteria and their near shore floating plastic shacks? I mean, why don’t you study, I dunno, how come there’re sea stars but not sea black-holes; or why betters don’t ever wager on seahorses; or who, among bacteria, mosquitoes, cockroaches, rats and drivers who don’t use blinkers, is gonna inherit the world when you humans are gone; or whether, given all the plastic floating on the seas of the world, all the people undergoing plastic surgery risk, afterwards, to go to bed and then to suddenly awaken in the middle of the You-Name-It Ocean with only a pair of leaking water wings around their arms and with a splintered mirror floating aside them on which it is written, with some cheap lipstick, “welcome home”?
And, above all, professor, how come you ended up studying precisely bacteria and their near shore floating plastic shacks? Did you lose/win a bet (on a rigged seahorse race, maybe?)

AMB- I came from the school that bacteria were bad and caused diseases, so when the whole idea of microbes living in us and on us, and being so important to shape our health came out I was amazed. A great book that just came out on this is Ed Yong’s “I contain multitudes“, I really recommend it. So I am curious about microbes in general and how they impact our lives. On the other hand I love the ocean, I live close to the ocean and I feel very strongly about plstic pollution. So when this project was presented to me I jumped on the opportunity.
As for the how
I ended up studying “bacteria and their near shore floating plastic shacks”, well, check out the documentary “Into the gyre”. It is a story of what was the inspiration for this project.

P- We’ll certainly watch it! So, professor, what are you planning to do to accomplish your science mission? Are you travelling to the future using some space slingshot effect (**) (or the effect of an actual absolutely freaking amazing slingshot of some sort) to get intelligent nanobots that can reach each and every bacterium on each and every plastic piece of trash of the coastal world waters and submit to all the bugs a 103 questions survey about their habits, genealogy, vote intentions and plans for the future [and then, of course, they’d go crazy and try to destroy the humanity –the nanobots not the plastic+bugs- by keeping on playing in unison all the existing vuvuzelas (more than zero are too many vuvuzelas anyway. SM’s note)]?

AMB- I place plastic samples in coastal waters for approximately one month, and collect them every week. The plastic is swabbed and the material  inoculated on microbiology media to look for actively growing microbes.

[The backgound image of the ocean is part of a Public Domain pic adapted by @sciencemug (source: Wikimedia Commons); the picture of the plastic bottle is by @sciencemug]

Part of the plastic is used to extract DNA, which we then sequence in two ways: we look only one small region of the DNA called 16S [more on 16S DNA? See here. SM's note] to explore microbial diversity; and also at all the DNA sequences to extract as much information as possible about the microbes. We are also planning on chemical analysis and electron microscopy of the plastic, the former to see if the bacteria are degrading the plastic in some way, and the latter to visualize what is going on the plastic surface.
You see, there are two sides to this project. One, is that it should add some more scientific data to the ongoing debates about plastic bag use, and other efforts to decrease plastic pollution. On the other hand, I hope this project will also expand into other colleges and, even better, to high schools and community groups. It would be great if kids could sample their own beaches and add data of their own. Not to mention that it would give kids a better idea of science.

P- Ok, got it. So, professor, you told us why you’re into this specific science topic, and what are you doing to make it work. Can you now tell us how are you funding your research project? Now, I guess a race seahorses farm is out of question (given the fortune you’d spend every month in rust preventer for the seahorseshoes). What about a shop selling fashionable recycled organic (given the bugs colonies on them) sea plastic bags, instead? You could commercialize them with a slogan of the kind star sytem’d fall for: “Get trendy & save the poor bacteria from the horrific curse of seasickness: buy our organic recycled sea plastic bags!”

AMB- My university is a primarily teaching institution, so we do not have a lot of research funding. I received some internal funds that have helped getting the project started. Just recently the project got a boost through a crowdfunding page and I hope now that we have some results to be able to apply for external grants.


[The pictures of the waves+surfers (a) and of Bernard's surfoard (b) are Public Domain images adapted by @sciencemug (source: Wikimedia Commons)]

P- Well, we’re almost done here! First, on behalf of my boss and the whole sciencemug gang, let me thank you a lot, prof. B., for your helpfulness, we wish you all the best with your research project(s) and life! And now, the last question: professor Ana Maria Barral, why science?

AMB- Science, when it is pure, it is really cool. You see I enjoy this project so much because it combines what I love (the ocean) with things I am curious about and want to learn more. So you explore, and you learn and you struggle trying to figure out how to do this or that, and then trying to figure out what does it actually mean. It is a very creative process. Besides, you get to work with other people, you despair and you celebrate, and it is just an amazing thing.

*
If, dear English speaking-thinking-reading visitor, you got all the movie references of this mess of an intro, eh, you should worry since you and me, well, we think alike. And I’m a brainless, on the verge of folly (yup! You can be mad even without a brain) dumb blog…
Ps
You should worry a little, in my opinion, even if you only kinda realized there were movie references in here.
PPs
Ok, ok, the refs are: “Big Wednesday”; “Dirty Dancing”; “To Wong Foo Thanks for Everything, Julie Newmar”; “Point Break”; “Road House” (ok, so, ‘bout this one, the limping mustaches are indeed the limping beard of the limping character played by Sam Elliott, but somehow “a pair of limping mustaches” is funnier than “a limping beard” and Sam Elliot wears a pair of glorious mustaches in many movies anyway…).
PPPs
Aliens, Doom, Rocky V and Thor are so self-evident, as references, that they aren’t counted. As for Steve Buscemi, well, do you really know a movie where he’s on steroids? (Nope, in Armageddon he’s space-insane, not under-steroids-insane…)

**
Yeah, this one’s pretty easy, so you don’t have to worry this time.


If you're interested in the oceanic plastic polllution and the plastiphere, here some things Ass. Prof. Barral suggests you to read and watch:

Vids:
- Into The Gyre (documentary)

CRAVING FOR MORE CRAZY INTERVIEWS BY SM? GO HERE, AND HERE!
Posted by @sciencemug at 12:01 AM